Ski resorts with a licence to thrill!

The highly anticipated new Bond film, No Time to Die, is scheduled for release at the end of September. Glitzy mountain resorts and daredevil ski chases are part and parcel of the famous spy’s escapades around the globe. In a nod to that, here are six resorts with strong links to 007…

The very creator of James Bond spent time as a young man in this fashionable resort in the northern Tyrol. After a short-lived stint at Sandhurst, Fleming moved to Kitzbühel in the late 1920s to study at a private finishing school and enhance his career prospects. While there he developed a love of skiing and climbing. Where he stayed and studied is today the 5-star Tennerhof Hotel.

The very creator of James Bond spent time as a young man in this fashionable resort in the northern Tyrol.

Kitzbühel is home to the world’s fastest World Cup downhill race, the annual Hahnenkamm. So it’s hardly surprising that Fleming created a character with the ability to tackle the steepest of slopes at breakneck speed and that Kitzbühel features as the place where 007 learnt to ski as a youngster!

Only Sean Connery has starred in as many Bond movies as Roger Moore – seven for each of them – and which of these icons makes the best 007 is purely down to personal choice. After numerous stints filming in magical Alpine settings, it’s little wonder Roger ended up living somewhere surrounded by snowy peaks, not to mention international cachet. That place was Crans Montana in the Swiss canton of Valais, where Moore was the resort’s most famous resident until his death in 2017.

A keen skier, Moore showed just how good he was on the slopes in the 1985 Bond movie A View to a Kill, also shot on location in Switzerland. An archetypal English gent, Moore could speak French and embraced the Swiss lifestyle and gastronomy that Crans offers. When he first moved to Switzerland, Moore settled with his family in Gstaad before relocating to Crans-Montana, which is also famous for its championship golf and picturesque lake.

Current Bond man Daniel Craig should know the Austrian resort of Sölden well – he spent plenty of time there for the filming of Spectre (2015), enjoying the comforts of the luxury Hotel Bergland. Particularly memorable scenes from the 24th Bond movie feature the resort’s landmark IceQ restaurant. Perched at 3,000m on the resort’s stunning Gaislachkogl mountain, the futuristic building doubled as the Dr Swann’s Hoffler Klinik. It’s here that Bond girl Lea Seydoux is snatched, triggering an exhilarating chase down the mountainside, taking in the Ötztal Glacier Road and Rettenbach tunnel, before the plane Bond is flying snaps off its wings and slides into a chalet!

In a celebration of Sölden’s 007 connection, an interactive Bond museum called 007 ELEMENTS has been built into the mountainside next to IceQ.

As a skiing destination, Sölden boasts a 144-kilometre ski area with two glaciers, which are used by the International Ski Federation (FIS) for opening the ski race season each October. Well-known for its après-ski, it also has one of the best spas in the Alps.

The birthplace of winter sports and go-to destination for shooting snowy action films, Chamonix’s moment to feature in a Bond movie came with The World is not Enough (1999). Pierce Brosnan’s third time at playing 007 saw him and Sophie Marceau, or ‘Elektra’, under fire and pursued dramatically down a remote mountainside by four paragliders.

Chamonix is the birthplace of winter sports and go-to destination for shooting snowy action films.

According to the script they were in the Caucasus Mountains in Azerbaijan, but actually, the scene was filmed around the Vallée Blanche, an area that demonstrates why Chamonix offers some of the world’s best off-piste skiing. Even today, the route the couple took is known as the James Bond Trail. Do that a few times and you’ll deserve a large cocktail or two in one of the local bars!

Jewel of the Italian Dolomites, chic Cortina d’Ampezzo proved the ideal setting for Roger Moore’s fifth portrayal of the legendary secret agent in For Your Eyes Only (1981). The inevitable ski chase sees Bond chased through forests by motorbikes before joining a bobsleigh track. 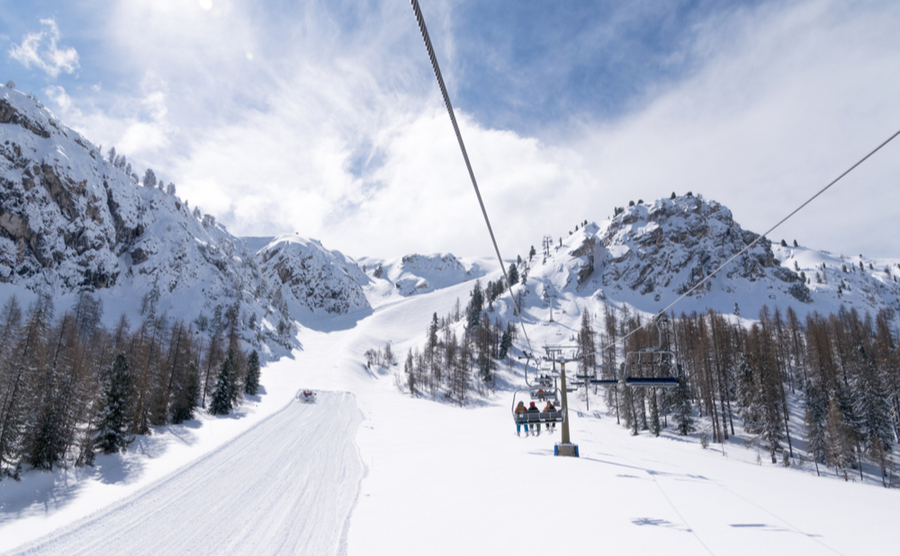 The inevitable ski chase sees Bond chased through forests by motorbikes before joining a bobsleigh track.

The film also showcases the resort’s ski jump and ice-rink, not to mention the impressive Miramonti Majestic Grand Hotel, where Bond stayed and is seen gazing from the balcony of room 108.

Glitzy St Moritz oozes James Bond credentials, so it’s almost a shame that both times it has featured in two of the famous secret agent movies it has been doubling for other locations. In The Spy Who Loved Me (1977) it was portrayed as Austria and in A View to a Kill (1985) as Siberia.